“The return on higher education would be much better if college were cheaper,” states The Economist in a rare tautologism.  The magazine goes on to note that the cost of post-secondary schooling has risen at almost five times the rate of inflation since 1983 and at not-for-profit and for-profit colleges, the default rate among graduates three years out is 15% and 22% respectively.  All of which begs the question, what are students paying for?  While the editorial then goes further to explore nuances in the ROI on a college degree based on different disciplines studied, the magazine is content to accept the data in line with conventional wisdom.  “Unsurprisingly, engineering is a good bet wherever you study it…[but] arts and humanities courses are much more varied,” it concludes before ceasing to perform any real analysis.

The editorial references the following quote by President Obama:

To hear The Economist tell it, “an angry art history professor forced him to apologise, but he was right.”

This is problematic on a few levels but what disappointed me most about this editorial is the Economist’s willingness to accept that humanities degrees are inherently and categorically less lucrative than other degrees.   It’s obvious to me that the liberal arts have a real ROI, and not just in terms of “nourishing the soul” as the magazine sarcastically comments.  The liberal arts, as I’ve said before, are about finding structure in ostensibly unstructured narratives.  This is arguably the most valuable and monetizable skillset one can develop.

Obviously, my viewpoint is colored by my being in proud possession of an Art History degree from a liberal arts institution that, according to PayScale, is a top-10 ROI provider among all US colleges.  (Number 2 according to Forbes.)  And there’s clearly a gap between my evangelizing and reality.  If the liberal arts are truly the gateway to hard returns on educational investment, yet liberal arts students aren’t seeing ROI the way, then one of two things must be happening.  Either educators aren’t teaching the arts in this manner or students aren’t learning them that way.  Cutting it further to figure out why this is happening, you get to the can’t / won’t explanation.  Here’s a probably unnecessary but incrementally helpful graphic (using art history synecdochically for all the liberal arts): 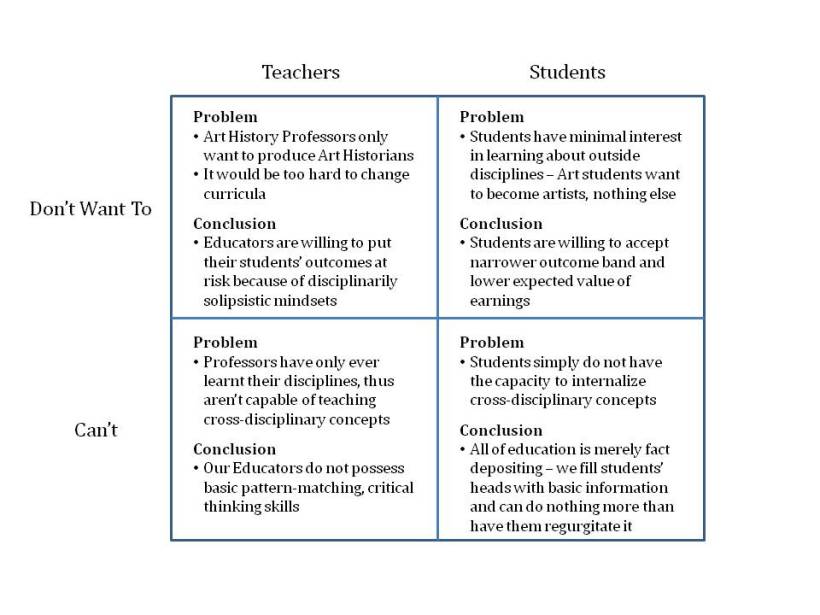 If you believe that educators are the problem and that they don’t want to or can’t teach their subjects the right way, you’d have to believe that educators are intentionally putting their students’ outcomes at risk because of their lack of respect for other disciplines.  The problem with this mindset is that throughout my career at a stellar suburban Pennsylvania high school, teachers went out of their way to incorporate “broader picture” lessons into all our classes.  My AP European History teacher, Mr. Hamilton, gave us a pop quiz on the works of art produced during the Romantic era.  My AP Lit teacher, Mr. Drake, encouraged me throughout my overly ambitious (ultimately mediocre) effort to bridge linguistics, anthropology, and literature in my final paper discussing artificial language as societal signifiers in Joyce, Anthony Burgess’s A Clockwork Orange, and Richard Adams’ Watership Down.  In college, my favorite classes similarly refused to let students sink into the single-subject quicksand mentality.  Prof. Snyder’s Advanced Microeconomics made us aware just how elegant Economics became when you could build quantitative economic models by incorporating rigorous, theoretical post-calculus concepts.  And many a Prof. Randolph lecture put the “history” in “art history,” reminding us just how futile it was to try and understand aesthetics outside the broader societal context.

Efficacy in cross-disciplinary pedagogy is a separate issue entirely and this is where we hit the Students Can’t / Won’t quadrants.  If you believe students are the problem, you’d have to believe that students willfully disdain the opportunity to broaden their educational awareness or that they are simply incapable of being taught critical thinking skills.  We can reject the latter case outright because it reduces the entire practice of education into mere fact deposition and re-collection.

I think we’re most likely to inhabit the Students / Don’t Quadrant.  Why?  It’s simply a question of mindset.  As early as elementary school, our day is broken up into disciplines.  1st period math.  3rd period reading.  6th period history.  We’re indoctrinated in this idea that learning ought to be compartmentalized.  Which is great, as I’m big a proponent of using structures to help conceptualize understanding.  But we miss out on the opportunity to encourage outside-the-box thinking.

Additionally, as kids develop personal identities, we make it extremely easy for them to develop identities around specific disciplines.  All of a child’s middle school and high school years are about building their personal narrative.  They alternate between seeking out and rejecting different stereotypes.  Obviously, some identities are based on extracurriculars or ethnicity – people are tennis players or “band geeks,” Asian-American Club enthusiasts or actively involved with the Hispanic Student Union.  As an educational system, we’re making it easy for kids to build identities around subject areas as well.  The science nerds take pride in having STEM courses come easy to them; they’d much rather get an A (or A-) in Physics than an A in Social Studies because they’ve built their personal narrative around being “the person who gets physics.”  Of the kids who are motivated to get As in every subject area, I’d argue it comes more out of competitiveness than out of an affinity for every one of the disciplines out there.

It’s just one of a number of ways in which the current educational system can be improved.  Apropos of which, I should mention that the Economist’s editorial did raise a good point about MOOCs.

“In time, transparency and technology will force many colleges to cut costs and raise quality. Online education will accelerate the trend. In 2012, 6.7m students were taking at least one online course. Such courses allow students to listen to fine lecturers without having to pay for luxurious dormitories or armies of college bureaucrats.”

But MOOCs are not just a way to lower the cost of education for huge swaths of the population, they also represent a fantastic opportunity to improve the quality of the curriculum that we present students.  Even if it’s as simple as combining two different courses into a Signature Track set, or going out of our way to foreground existing  cross-disciplinary courses, the low cost of MOOC deployment (relative to potential reach) make their role in advancing educational mindsets a societal imperative.

This is maybe a little more in-depth a discussion than the Economist would feel is warranted in their editorial, but the attitude the magazine evinces is pernicious.  It seems almost happy to be able to rank disciplines in terms of monetary value and then make judgments about educational ROI based off of that.  Instead, the right approach is to think hard about what is most valuable to the individual and to society in each discipline and find ways to encourage that.  As a subscriber to basic economic principles and as a humanist, I firmly believe that when you teach subjects in a way that maximizes the societal good arising out of it, you maximize the monetization outcomes for those subjects’ students.  The discussion about college costs is healthy and mandatory.  I would only hope that solutions are sought not just to treat the symptoms, but the root causes as well.